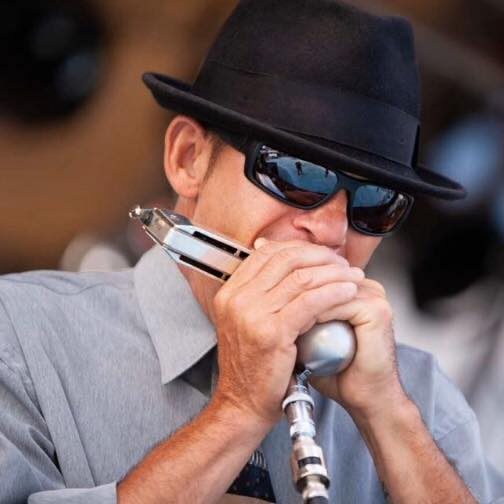 Once you’ve seen singer/harmonica player Little Marty perform you can’t forget it. His show is characterized by an animated stage presence and he exudes magnetism. He also brings a wealth of knowledge of ‘50s Chicago and west coast jump blues harmonica styles and plays with aplomb and flair.

Born in 1969 in Milton, Ontario, Marty spent his childhood in Milton, Barbados (where the family has 300 year old roots) and Texas. After a military stint, Marty moved to Victoria in 1990. He had already started playing harp (at 17) and quickly established himself in Victoria’s burgeoning blues scene, playing initially as JukeJoint, with Steve Anderson, Daemon “Bottleneck” Baker, David Shaw and Jesse Fisher. Over time the band changed with Dave Harris coming in and soon adding Charles Gates and Clark Brendon, to form Little Marty and The Jukejoint. This band had a successful run at Swan’s Hotel, The Yale, Blues Bash, Hermann’s and other gigs and recorded an album, “JukeJoint Boogie”.

After that ran its course, Little Marty teamed up with Paul Pigat, Michael Kaeshammer, Damian Graham, Pete Turland and various others before he moved to Saltspring island. There, he recorded an album with The JukeJoint Orchestra (“Jump Back”) including the above, plus Paul Wainright, Al Pease, Gene Hardy, Mike Broadley and others. After some gigs and acclaim Marty dropped out of the music scene for some years.

He also has guested with Phillip Walker, Sue Foley, King Biscuit Boy and others. He still occasionally played, guesting with Dave Harris at gigs and attending blues jams. He also picked up washboard and washtub bass along the way and is quite adept at both. Recently he has found his way back to music.

His style and repertoire is heavily influenced by Little Walter especially but also Sonny Boy Williamson II, Slim Harpo, George Harmonica Smith, William Clarke and Rod Piazza. His repertoire is also dotted with earlier country blues from the likes of Tampa Red and Kansas Joe McCoy. He also writes some material. His singing is strong and clear, his harp playing exciting and inventive, yet tradition based.

One of the finest blues players on Vancouver Island, Little Marty is well worth your time if you love the blues! Don’t miss him, when you get the chance!