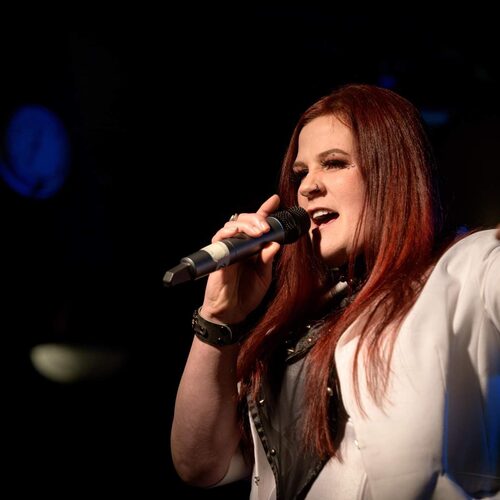 Jona Kristinsson is a singer of many genres who hails from “The Land of Ice and Snow”, Iceland. Currently residing in beautiful British Columbia, Canada, Jona has been recognized as one of the most powerful singers on the west coast. After moving to Canada, Jona’s uncle, Thor Kristinsson of Thor and The Thundercats, took her under his wing and taught her a thing or 6 about the blues. Since then, Jona has run with the blues and is currently working on her first solo album with producer and engineer Rick Salt.

Jona has been performing as Etta James’s vessel in Miss Peaches and Me: Tribute to Etta James. Her show has been running for 5 years and it has stunned audiences all over the west coast of Canada. It has been getting rave reviews such as, “I could have closed my eyes and sworn I was at an Etta James concert” and “Jona has captured Etta’s voice and spirit and rolled it all up in one incredible show” Jona is also known as a songwriter, DJ, and esteemed vocal coach. Backed by her stellar band, she delivers a blistering mix of contemporary & old school blues. She continues to connect with her audiences everywhere, bringing her enormous personality and her love for music wherever she goes! Blues is her business and business is good.